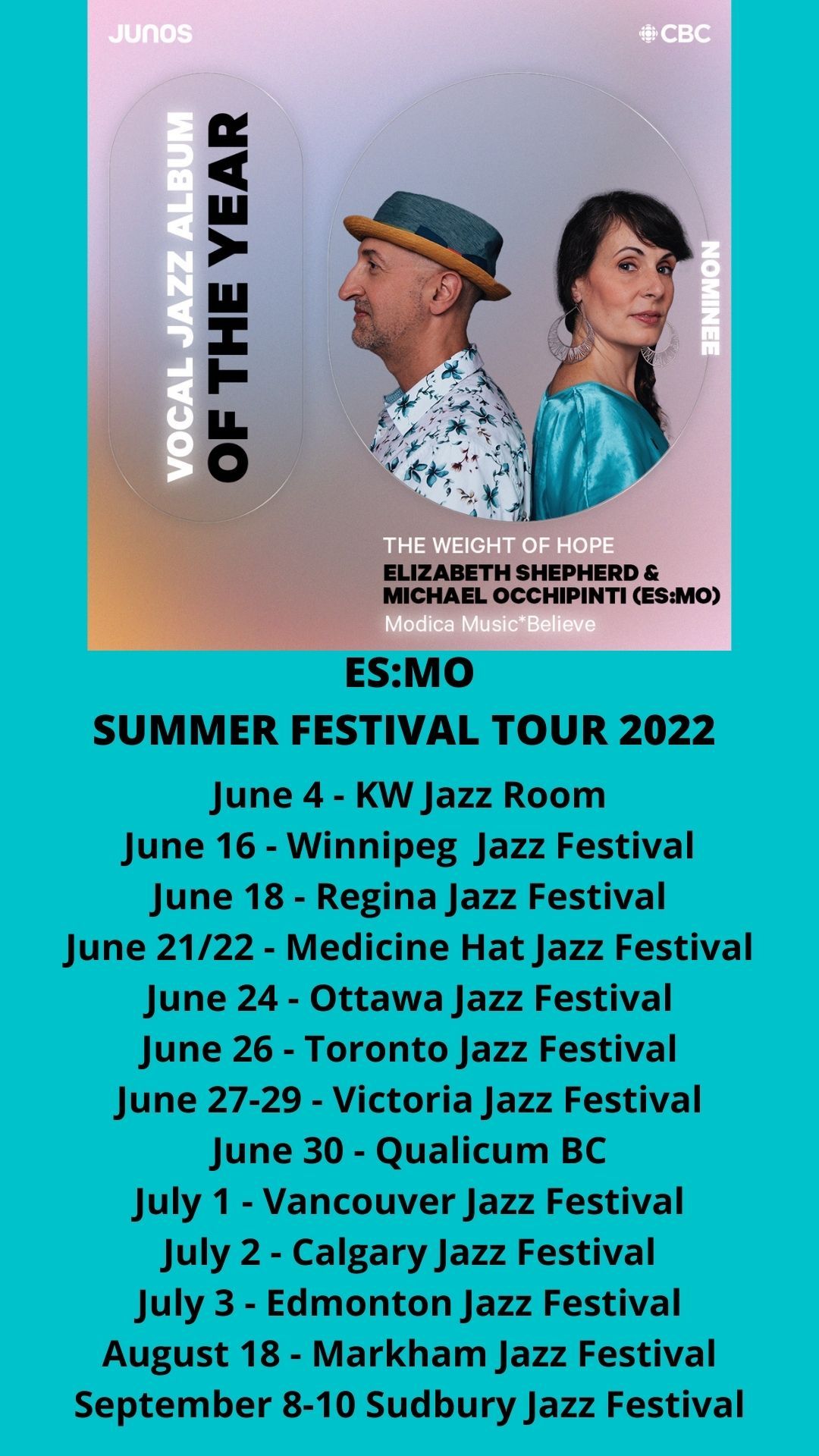 “The first advance track is a cover of William Bell's "Any Other Way," which was made famous in the '60s by Toronto's trailblazing soul singer Jackie Shane. On their cover, Shepherd and Occhipinti retain the song's soulful leanings, adding touches of country and jazz. Shepherd's voice is as clear as a bell, and especially soothing as she dips low in her range to intone the titular "any other way" at the end of each chorus. Occhipinti takes an expansive solo that makes us pine for the days when many songs included them.” - CBC MUSIC

The Weight of Hope

Purchase or Stream The Weight of Hope. JUNO Award (Canada's Grammy) for Vocal Jazz Album of the Year 2022! 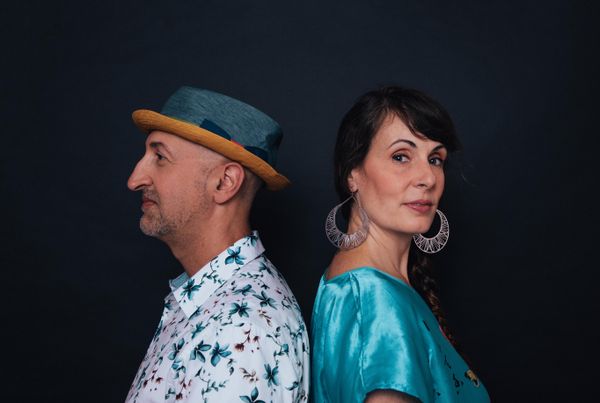 The Weight of Hope is a 2022 JUNO AWARD NOMINEE!

We are thrilled to announce that ES:MO's The Weight of Hope has been nominated for the Juno Award (Canada's Grammy) for Vocal Jazz Album of The Year!  The Awards will take place May 14/15, 2022 in Toronto.  We performed as part of CBC's Juno Awards Jazz Showcase, with Michael acting as the musical coordinator for the show that featured us alongside four other nominees.  Check the whole show out HERE!

The Weight Of Hope

In 2019 we had the opportunity at the end of a tour to book a few days in the studio at the Banff Centre For The Arts.  We wanted to capture some of our live duo set, as well as work on some new ideas, and we left with a dozen songs and a memory of the unforgettable sound a mother elk makes to her herd when a few coyotes appear (we happened to be in the middle of that encounter). However, we wanted to expand on that first session, and planned to record more.  Once the Covid pandemic hit and canceled all of our concerts and tour plans, it all got very real: Michael is based in Ontario, and Elizabeth in Quebec, so if we couldn’t even get together with our friends and family locally, we were definitely going to have trouble recording.


Luckily, summer 2020 gave us a window where we could “bubble” with our families, and we got together in Quebec so our kids could play and we could do some writing.  We were also able to get together in Toronto a few months later with Davide and Roberto, but just as we were close to having all the songs we wanted ready for mixing, the next Covid wave hit, so the internet proved to be our lifeline. We Facetimed or uploaded ideas, and recorded additional parts at home.  Where mixing would usually mean being in the studio with David Travers-Smith to shape the record in real time, we ended up typing or phoning our mixing comments back and forth.  All of this to say that it has been a long journey to The Weight of Hope.  It seems surreal to even write this now, but while the dark period we’ve gone through globally has very much coloured this album, as it did all aspects of life, we’ve also tried to colour it with the joy and intimate communication we have playing live with other people.  It has been very heavy to be deprived of that indeed.

The Weight of Hope comes from a line in a poem by Alice Oswald that we both thought fit the times we are living through, so much so that Michael referred to it in his lyrics for October Daughters, and Elizabeth created the words for the title track. We think it sums up a little of what emerged from the chaos; as the world seemed to be splitting at the seams while we were all holed up in our homes, we still forged ahead to create something beautiful, not knowing exactly how or even why at times. Music is a gift, as evidenced even in the most difficult times, so it seemed fitting that this album, which came together in a dark chapter, should teeter between the imperative and the desire to believe that things will be better. The thing we can always cling to is hope, however difficult that may at times feel; what better vehicle to deliver that hope than music?

Thank-you David Travers-Smith for your dedication and for patiently interpreting our written and spoken communication as beautiful sound.  Thanks to Davide, Mark, and Roberto for the creativity and enthusiasm they bring to our music. Thanks to all of the various recording studios and staff who recorded us in addition to David Travers-Smith, especially Jeff Wolpert, Jeremy Bernard, Roberto Occhipinti, Sydney Galbraith, and James Clemons-Seely.  Thanks to Camille Gladu-Drouin for her creative photography, and to Stefan Verna for his vision for our Any Other Way video.  Thanks to Frank Nagy for the photographs that inspired the cover painting and for capturing the painting itself, and to Larry Davidson at D’Addario Canada for the strings we photographed.

ES:MO is more than a musical duo, it is a tribute to the deep friendship between the two of us and our families.  Huge thanks to our respective spouses who are connected to our work as well as being the anchors in our lives, Johan Hultqvist (Pinwheel Music) for his insight, support and consultation, and Cidalia Lopes for her inspired cover painting.  Thanks to our children for their love and inspiration, Gianluca Occhipinti, and the four October daughters Bea and Lili Occhipinti, and Sanna and Alma Hultqvist-Shepherd.

A variety of people have helped ES:MO get to this point, too many to list, but thank-you to Roberto Occhipinti for welcoming us into the Modica Music family, to Bernie Finkelstein for his input on this album, and to Matteo Ruperto and Max di Domenicus for sharing your beautiful promo video and photos from Rome. To all the faithful presenters and colleagues out there who invite us to tour year after year in Canada, Italy, Germany and beyond - we’d like to thank each of you for believing in the music, and for keeping art alive through these wild times. See you on the other side.
Read more…
0:00/???

We're so glad we were able to tour Canada this past October-December, as at present all of our early 2022 shows are being canceled by Covid!

We just got nominated for a JUNO AWARD for 2022 Vocal Jazz Album of The Year!  We're thrilled, and we'll be crossing our fingers until the awards are announced in Toronto on May 15, 2022!

We're looking forward to things opening up, allowing us to get back to playing live again!  We just got together in Montreal to shoot a live to video concert shot by our friend Stefan Verna, and some of the footage will be used by director Howie Shia and incorporated into a new animated video for "Riverman."   Hoping we can show you this new music in the spring, but here's a PREVIEW

We loved touring across Canada this past autumn, starting in Saskatoon SK October 29th, and finishing in Coburg, Ontario Dec. 10th, with stops in Banff, Lethbridge, and Canmore Alberta, Penticton, Vernon, Nelson, and Kalso BC, Antigonish, Halifax, Wolfville, West Brooklyn, and New Glasgow (Nova Scotia), and a homecoming show for Michael in Toronto at Hugh's Room Live.  Photos from our tour are in the photo gallery.

We've been really pleased with the response to our official ES:MO guitar string jewelry!  Since our album cover features a painting of guitar strings, we've teamed up with designer Michelle Dall'Acqua at Heartstrings Jewelry to create a special ES:MO necklace and bracelet, made from guitar strings.  It's $40 for either the necklace or the bracelet (or $50 and we throw in a CD) and you can do an e-transfer to esmoband@gmail.com or send us a payment via Pay Pal.  It's unique, handmade, one of a kind, and perfect for the music lover you know, or for anyone who likes cool original stuff!